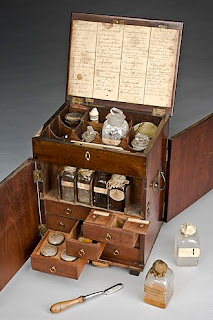 Pick your poison. Image by way of wikipedia.

If there was a scarier place for a soldier to be in the American Civil War than a battlefield, it might have been a hospital, of either the field or conventional variety.

Medical science had not yet caught on to the germ theory of disease. Overworked doctors rushed from patient to patient with unwashed hands and instruments. Amputation was the order of the day.

But if there was anything scarier than Civil War-era surgery, it might have been the medicine. It was a common practice to administer heroic doses of calomel to patients for a variety of ailments, including diarrhea and dysentery.

Among the ingredients of calomel were a mixture of mercury and chloride.

I managed to avoid a chemistry class in my education, such as it was, but I don’t think you need an advanced degree in that field to get a bad feeling about that.

One obvious result was mercury poisoning, but the specific symptoms could be horrific, including loss of teeth, rotting jaws and gangrene in the mouth and jaws.

Calomel caused misery and sometimes death to countless people, even ruining the health of “Little Women” author Louisa May Alcott during her stint as a nurse for wounded soldiers.

It boggles the mind that generations of doctors would rely on a chemical that caused so much damage and prescribe bad medicine for so long.

But the same kind of thing has happened over and over in the realm of policy and politics for the last half century.

And it might be about to happen again in West Virginia unless people speak up.

The bad medicine I’m referring to is the idea that cutting taxes for the wealthy will create jobs and economic growth. We’ve been told that over and over for years, but the evidence for that is about a scarce as that of the benefits of ingesting calomel.

Recently, researchers at the London School of Economics did the math. In a big way. They examined the impacts of tax cuts for the rich over a 50-year period in 18 countries in the Organization for Economic Cooperation and Development (OECD).

“We find that major reforms reducing taxes on the rich lead to higher income inequality as measured by the top 1% share of pre-tax national income. The effect remains stable in the medium term. In contrast, such reforms do not have any significant effect on economic growth and unemployment.”

“Furthermore, we find no effect of tax reforms on real GDP per capita. When looking at the effect on unemployment rates, the estimates show a slightly different pattern. Here, tax cuts for the rich lead to slightly higher unemployment rates in the short term.”

“Turning our attention to economic performance, we find no significant effects of major tax cuts for the rich. More specifically, the trajectories of real GDP per capita and the unemployment rate are unaffected by significant reductions in taxes on the rich in both the short and medium term..”

“Cutting taxes on the rich increases top income shares, but has little effect on economic performance.”

If that’s not enough, other research in the field of public health from a variety of sources has found higher rates of inequality to be associated with many social problems, including increases in crime and violence, infant mortality, obesity, addiction, mental health problems and general unhappiness.

It’s very likely that there will be efforts in the coming legislative session to pursue this failed policy by changes to income and business property taxes that benefit the wealthy at the expense of everyone else.

I’m sure we’ll be told that taking the fiscal equivalent of calomel will be good for us. I hope the people of West Virginia send a loud and clear message of thanks but no thanks.