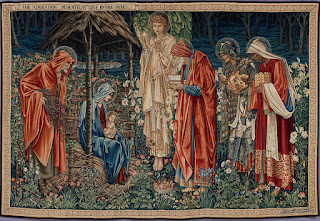 Today is the Feast of the Epiphany, a major holy day in Western Christianity. It's one of my favorites (right up there with Ash Wednesday and Maundy Thursday). In an ordinary year, which this isn't, I'd attend special services whenever possible.

The word can mean something like manifestation, often of something divine, and the day celebrates the adoration of the Christ child by the Magi in the Gospel of Matthew. I don't take the story literally, but it means the  manifestation of divine revelation to the Gentiles. Other texts associated with the day are those of the Transfiguration of Christ on the mountaintop.

The word also has grimmer associations. Antiochus IV, self-styling himself Epiphanes, was a Hellenistic king who considered himself divine and initiated a brutal persecution of the Jews in the 160s BCE. That persecution inspired the revolt of the Maccabees, one result of which is the Jewish holiday Hanukkah, which celebrates the cleansing of the Temple after its defilement with idols.

The Irish writer James Joyce borrowed the world from the realm of religion and used it to mean something like insight or inspiration. In that sense, it's kind of like a revelation or uncovering, which is the literal meaning of the Greek-derived word apocalypse.

In that sense, today is going to be a day of epiphany, manifestation and/or revealing in Washington as the fate of constitutional democracy, however imperfect, hangs in the balance. I'm guessing that the things said and done today will long be remembered.

This might be a good time to remember the words of Abraham Lincoln: “in times like the present, men should utter nothing for which they would not willingly be responsible through time and eternity.”