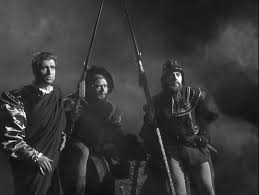 That's right, it's that time of year again, which means it's time to quote  what the sentry Marcellus has to say about Christmas as he stands on the battlements of the castle of Elsinore in Act 1 Scene 1 of Hamlet.

If all that wasn't enough, two guards on the night watch have seen what seems to be the ghost of the dead king on the battlements--and they're convinced this is an ill omen.

The guards, Marcellus and Bernardo, have invited the student Horatio, Hamlet's best friend, to join them in their lonely vigil, where for some nights past a ghost has appeared resembling the late King Hamlet, father of the prince who is the main character of the story.


At this point, all I can do is say with Horatio something that has become a mantra of mine on many things spiritual, "So have I heard and do in part believe it."