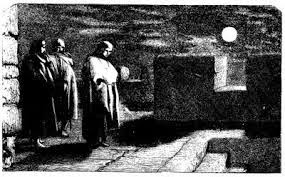 That's right, it's that time of year again, which means it's time to quote the sentry Marcellus as he stands on the battlements of the castle of Elsinore in Act 1 Scene 1 of Hamlet.

The tone of the scene is pretty ominous. The legitimate ruler is no more. A usurper is on the throne. There are wars and rumors of war and evil portents in the land.

I feel sorry for those guys...

Marcellus and Bernardo have invited the student Horatio to join them in their lonely night vigil where for some nights past a ghost has appeared resembling the late King Hamlet, father of the prince who is the main character of the story.