A call to replace. And a gratuitous animal picture 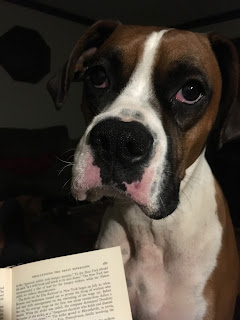 I wish I could link a new story from Politico, but it's limited to paid subscribers of which I ain't one. The gist of it is that there's growing consensus among governors that the Affordable Care Act shouldn't be repealed until it is replaced. That's encouraging. I hope congress listens.

Meanwhile, my dog Bo and I attended a rally yesterday outside the offices of WV's Republican Senator Shelley Moore Capito urging the same. We were a little disappointed Bo's picture didn't make the paper so I'm including this one, which shows his standard way of requesting a walk in the morning while I'm trying to drink coffee and read.

This fight will require dogged persistence.
by El Cabrero

About time we got a gratuitous animal picture!