The light (or train) at the end of the tunnel 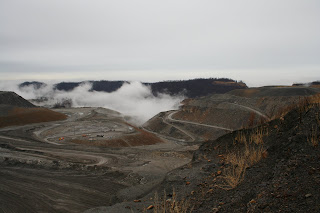 El Cabrero has been musing here this week about current coal controversies in and around WV, particularly mountaintop removal mining. The issue has heated up again in the wake of signals that the coal policies of the Obama administration would reverse many Bush era policies.

I've argued this week that whatever happens, the situation will be tragic for many coalfield communities. In fact, it's been that way for 100 years or so. I don't have any easy answers but here are a few thoughts:

*We need to start thinking in terms of the opportunities presented by the emerging "green collar economy." Allow me to put in another plug for Van Jones' book of the same title. Many companies and public agencies are making more or less sincere noises about moving in a more sustainable direction. And there are public resources to support this emerging economy in both the stimulus package and President Obama's proposed budget. There is also the possibility of using federal funds for reclaiming abandoned mines to create jobs aimed at mitigating some of the damage.

*One of the more interesting efforts to rethink economic development around here is Create West Virginia. In some of their publications, they emphasize that in order to move to a high road creative economy, we need to focus on talent, technology, tolerance and quality of life issues.

Here's a question to think about: as we move into an economy in which creative and talented people will be able to work from anywhere, will the mined-out areas of southern West Virginia be anywhere anybody like that will want to live and work?

*I'm convinced that it is possible not only to have meaningful climate change policies, but to use these to help low income people and as well as areas like southern West Virginia deal with the changes.

A few years back, Robert Greenstein of the Center on Budget and Policy Priorities suggested that the auctioning of carbon credits in a cap and trade system could be used to raise revenue to ease the impact of such changes on low income people, state and federal budgets, and workers and communities in affected industries. The Obama administration has embraced some of these ideas, but these are facing an uphill struggle in the Senate.

Sooner or later, something like a cap and trade system or carbon tax is likely to happen. It would be smart politically (in addition to being the right thing to do) for such policies to specifically provide assistance for those areas that sacrificed so much in the coal age.

ON THE SAME TRACK, there's some support in the WV House of Delegates for a resolution supporting a wind farm in southern WV on a site scheduled for mountaintop removal. And a court has given the Obama administration a deadline to figure out its plan, according to Ken Ward's Coal Tattoo.

WANNA DO SOMETHING TODAY? Call your senators today in support of President Obama's budget. The American Friends Service Committee is urging people to urge their senators to

Vote against any amendments that cut spending on human needs at home and abroad.

Support any efforts to reduce the military budget.

CHICKEN LITTLE. The AFLCIO blog has been having fun with a contest to find the most hysterical response to the Employee Free Choice Act. In WV, talk of collective bargaining for public employees usually starts a similar hissy fit, but a poll shows the public supports it.

BARRIERS. Here's a little video from AFSC on barriers to peace in the Mideast.