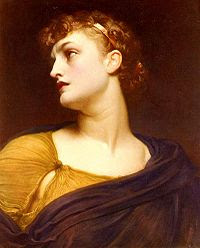 It seems to El Cabrero that the kinds of stories a culture tells itself shapes the way the people within it view the world. US residents, alas, have been fed a bit overmuch on a diet of action movies and french (freedom?) fries.

In action movies, there are definite good guys and bad guys with little or no ambiguity. The good guys usually win (in the US version anyway) and the bad guys lose and there's a happy ending.

Real life, however, is often more like a Greek tragedy than an action movie. There may be some better or worse characters, but it often involves clashes of rights and wrongs--and there will be some casualties by the time it's over.

Sophocles Antigone is a case in point. Antigone is a daughter of Oedipus. Her brother was slain outside the gates of Thebes for trying to overthrow the ruler Creon. Creon decrees that his body is to be left unburied. For ancient Greeks and other Mediterranean cultures, not being buried was considered to be worse than dying.

Antigone is torn between duties to the state--Creon, after all, was a legitimate ruler and her brother had no claim to power--and those to her conscience, her family and the gods. She can't keep all of them happy. In an act that some have described as world literature's first instance of civil disobedience, she buries her brother but must face the consequences by being buried alive under orders from Creon.

The ruler Creon suffers in turn. His beloved son Haemon was betrothed to Antigone and kills himself when he finds that she is dead. Creon's wife Eurydice likewise kills herself on learning of the death of her son, cursing Creon with her last breath. In the end, Creon is disgraced and despised by all Greece for his arrogance.

(I never said Greek tragedies weren't a downer. The same, however, could be said about much of real life.)

Former President George Bush was all about action movies--smoking the bad guys out of their holes. That worked out pretty well, huh? But people use the action movie frame across the political spectrum.

Occasionally the gods may give us an action movie type fight--a struggle with little or no ambiguity. Such fights are rare and precious. Much more often, however, we live in the realm of the tragic.

OH GOOD, HE SAID, WITH IRONY. Here's an item on coal to liquids and some of the problems that go with it.

A LITTLE GOOD NEWS. Blair Mountain in Logan County WV, the site of a 1921 historic battle between coal companies and miners fighting for the right to organize, has been added to the National Register of Historic Places.

SPEAKING OF GOAT ROPES, here's something to think about regarding Iraq.

SHELTER FROM THE STORM? Maybe not. Six million American families may face losing their homes through foreclosure in the next three years.

WHILE WE'RE AT IT, the NY Times reported yesterday that things are getting so bad that some banks are walking away from houses they foreclosed.

RUNNING AND EVOLUTION. There is a connection.

Thanks for stopping by!