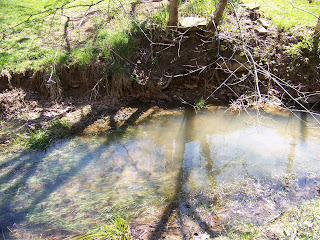 He's in there somewhere.

We interrupt our regularly scheduled program to announce that Fish Day officially occurred at Goat Rope Farm on Saturday April 4.

Normally, the creek has a decent amount of minnows and crawdads, but for the last two years it has dried up completely in late summer. It takes several months after the water is flowing again for the fish to show up.

The first customer of the spring showed up this weekend and was unusually large--about five inches. It's not clear at this point whether he (or she) meant to get here or just took a wrong turn.

I'm assuming they come from downstream since we're at the head of the holler and spontaneous generation isn't part of nature's normal operating procedures.

I can already hear a grateful world saying "Thanks for sharing!" Well, yer welcome.

IT'S BAD. The latest unemployment figures, that is. We're now at 8.5 percent nationally.

PASS THE POPULISM PLEASE. Check out the latest in CEO pay here.

A MODEST PROPOSAL to make the most of the federal stimulus package to ease unemployment can be found here.

THIS IS WEIRD. A robot has apparently made a scientific discovery on its own, according to the folks at Wired Science. They don't look like people yet though--unless they've really got us fooled.