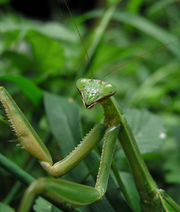 How good is your kung fu? Image courtesy of wikipedia.

As a rule, El Cabrero tries to keep a healthy distance between himself and our insect friends. But some of them are pretty cool.

My personal favorite is the praying mantis (even though the mating behavior of the females strikes me as totally unsportsmanlike). I even had the honor of being beat up by one of them once.

As I've mentioned many times here, I've long enjoyed practicing the martial arts. I've dabbled in several but spent the most time with Okinawan/Japanese karate, which traces itself back in legend anyway to Shaolin kung fu.

Now, if the Gentle Reader has watched the proper measure of Chinese movies, he or she will know that many Shaolin styles are based on the movements of animals. Five big ones are tiger, crane, snake, leopard and dragon.

(Don't ask me how they researched the dragon part...)

There are several other animal styles, including praying mantis. According to that legend, a monk who lost many matches gained insight by studying and emulating the movements of that insect.

One day several years ago, I was going with Rob, a karate buddy of mine to Parkersburg, WV to meet with community folks about how to respond to hate group activity. When we stopped at the sacred Milton Go Mart, there was a big beautiful mantis on the wall.

I asked my buddy if he thought this one knew his stuff. I thought they were bluffing. To find out, I picked a blade of grass and gingerly poked it at him. KAWHAM! He/she flew at me so fast that I was startled and tripped and hit the ground.

I've been stung and bitten by many insects in my day, but that was the first time I lost to one in a fair fight. I just felt like sharing that today.

INEQUALITY can be bad for your health.

READING can be good for your morals.

DARWIN, DARWIN EVERYWHERE, including in art and human creativity.

MORAL SENTIMENTS. David Brooks writes here about the evolutionary origins of morality and its basis in emotion. But the Scottish Enlightenment people like Hume and Smith got there first.

Wonderful story! Thank you for sharing it.

Thanks, Nick. I took it as a good omen. The meeting went OK anyway.