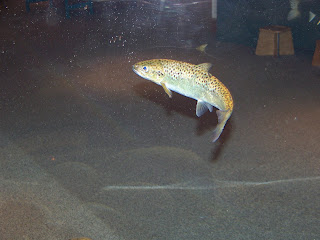 They do eat other fish, after all.

There are plenty of amusing interludes in Benjamin Franklin's Autobiography, but one of my favorites has to do with his resolution as a young man to become a vegetarian.

He kept to his resolve pretty well for a good stretch, until he was on a boat journey from Boston when people began catching cod.

...Hitherto I had stuck to my resolution of not eating animal food, and on this occasion I consider'd...the taking every fish as a kind of unprovoked murder, since none of them had, or ever could do us any injury that might justify the slaughter.

The problem was, those cod looked and smelled pretty good as they were being cooked. While he considered his vegetarianism as reasonable, there was this little issue:

...I had formerly been a great lover of fish, and, when this came hot out of the frying-pan, it smelt admirably well. I balanc'd some time between principle and inclination, till I recollected that, when the fish were opened, I saw smaller fish taken out of their stomachs; then thought I, "If you eat one another, I don't see why we mayn't eat you." So I din'd upon cod very heartily, and continued to eat with other people, returning only now and then occasionally to a vegetable diet.

So convenient a thing it is to be a reasonable creature, since it enables one to find or make a reason for every thing one has a mind to do.

HEALTH CARE NOW? Bring it on.

MORE FUN WITH THE SUPREMES. Here's the Washington Post on the Massey Energy/Don Blankenship/Brent Benjamin/WV Supreme Court saga now before the US Supreme Court.