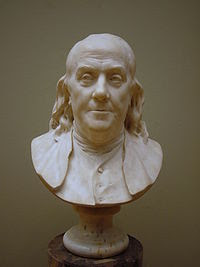 If there is such a thing as an American archetype, it might be the idea of the nation as a place where one can remake oneself and create one's own destiny. It was never exactly the case for many people, but it did seem to happen often enough.

If that's the case, then the original model for such a person may well have been Benjamin Franklin. Last week, Goat Rope took a look at some nuggets from his Poor Richard's Almanac. It only seems right at this point to give a shout out to his famous and enjoyable Autobiography.

Now every autobiographer is arguably by definition an unreliable narrator, but Franklin's would be worth a look even if it was a work of fiction. It is also an early example of America's long love affair with self-help books, since it is chock full of advice and axioms for self improvement.

Franklin began writing it in 1771 at age 65 while residing in England. He returned to it in 1784 and worked on the later sections in 1788. The work was uncompleted and ends abruptly sometime in the 1750s, well before his role in the American Revolution.

Over the next few days, Goat Rope will serve up a plateful for the Gentle Reader's consideration.

BUBBLE, BUBBLE, TOIL AND TROUBLE. Here are some thoughts on the origin of the economic crisis.

THE DESERVING POOR. Times like these put a different face on poverty.

SUPREMES. Here's the latest on a case now before the US Supreme Court regarding the propriety of a justice elected mostly due to the money from Massey CEO Don Blankenship ruling on cases involving Massey. And here's background.