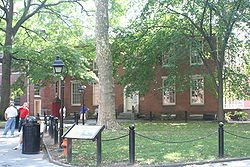 The American Philosophical Society in Philadelphia was an offshoot of Benjamin Franklin's Junto. Image courtesy of wikipedia.

Lately Goat Rope is hanging out with founding father and all-round interesting guy, Benjamin Franklin, but you'll also find links and comments about current events. The series started last week with Poor Richard's Almanac if you feel inclined to take a look.

For the next few days, I'll be combing though his autobiography for interesting nuggets.

One of the characteristics of Franklin's era of the Enlightenment in Europe and what would become the United States was the growth of civil society, which can be understood as voluntary associations outside the realm of government and commerce. It's an important example of social capital (search the Goat Rope archives for an earlier series on that).

People, usually men of at least middling means, would gather in clubs, coffee houses, and other locations for fellowship, conversation, self-improvement and social betterment. Such gatherings helped create the public sphere, as the German philosopher Jurgen Habermas has noted. They also paved the way for greater democratization.

Franklin was a social capitalist extraordinaire, founding and participating in all kinds of groups. One of these he called the Junto. As he put it,

...I had form'd most of my ingenious acquaintance into a club of mutual improvement, which we called the JUNTO; we met on Friday evenings. The rules that I drew up required that every member, in his turn, should produce one or more queries on any point of Morals, Politics, or Natural Philosophy, to be discuss'd by the company; and once in three months produce and read an essay of his own writing, on any subject he pleased. Our debates were to be under the direction of a president, and to be conducted in the sincere spirit of inquiry after truth, without fondness for dispute, or desire of victory; and, to prevent warmth, all expressions of positiveness in opinions, or direct contradiction, were after some time made contraband, and prohibited under small pecuniary penalties.

The club endured for several decades and span off several similar groups, including the American Philosophical Society. Franklin and others found that such gatherings polished their thinking and communication skills and were directly or indirectly useful in their business and public affairs.

It was an early illustration of Harvard sociologist Robert Putnam's idea that social capital is the building block of other kinds of success. It's a sad fact that many indicators show that social capital has declined in the US beginning in the second half of the 20th century. And we're paying the price for that.

MORE SUPREME FUN. Here's an AP article and something from the Gazette summarizing debate at the US Supreme Court in the Massey/Blankenship/Benjamin saga. I missed this NY Times editorial on the subject that ran Monday. It could be months before the court reaches a decision.

DREAM ON. Messing with sleep patterns messes with your metabolism.