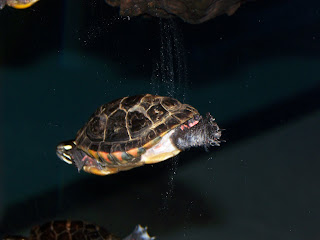 El Cabrero has been giving a shout out this week to Laurence Gonzales' book, Deep Survival: Who Live, Who Dies, and Why, which looks at how people do (or don't) make it through extreme situations.

It seems to me that some of what he has to say applies to ordinary situations as well. Here's today's sample:

Al Siebert, a psychologist, writes in The Survivor Personality that the survivor (a category including people who avoid accidents) "does not impose pre-existing patterns on new information, but rather allows new information to reshape [his mental models]. The person who has the best chance of handling a situation well is usually the one with the best...mental pictures or images of what is occurring outside of the body."

The map really doesn't necessarily correspond to the territory.

IF IT'S ANY CONSOLATION, IT AIN'T JUST US. The Economic Policy Institute estimates that the economies of the world's major developed countries will shrink in 2009.

THE UNION PREMIUM. Unions provide better wages and conditions for workers in every state. Check out your own state data here.

FORECLOSURES. Here's a first look at President Obama's proposal to deal with the housing crisis.