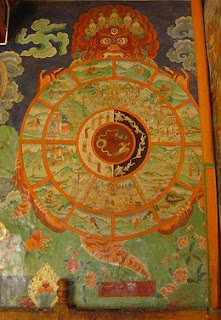 Tibetan wheel of life and death, courtesy of wikipedia.

According to Buddhist teachings, I'm a pretty lucky guy. And if you're reading this, you probably are too, just by virtue of being human. Buddhists believe (metaphorically at least) that without attaining enlightenment, sentient beings are destined to cycle on and on in Samsara, the realm of birth and death.

Depending on karma, one can be reborn in any of six realms, which range from heavens to hells. All such states are impermanent, but some are more or less pleasant than others.

Believe it or not, being born as a human is one of the better gigs. It is believed to be the only one in which one can make progress towards waking up and escaping the endless cycle of coming into being and passing away. Those born in other realms are either too ignorant, miserable or blissed-out to make any headway.

According to some Buddhist teachings, human birth is really, really rare. As in imagine a blind tortoise at the bottom of the ocean that swims to the surface once every hundred years in an effort to put his neck in a wooden yoke floating on the surface. He's got a better chance of doing it than most beings have of being born as a human.

One doesn't have to take this literally to get the point that people do have a vast potential if they choose to develop it. Still, if we're the lucky ones, I'd hate to think what the other gigs are like...

ANOTHER NOD TO THE ODYSSEY. A few months back, there was an extended series here on the Odyssey of Homer and what it might have to say about the difficulties and dangers some combat veterans face on their homecoming. This item from the Jan. 2 New York Times is a case in point.

FROM HOMER TO VIRGIL. Speaking of the classics, in the Aeneid, Virgil speaks of the goddess Rumor (aka Fama or Ossa) as "nimble as quicksilver among evils." Here's a good AP article by the AP's Tom Breen on popular rumors and hoaxes of today.

HARD TIMES HAVE COME to the "bubble bourgeoisie."

STIMULUS. Will it be bold enough?

FUNERAL FOR A FRIEND. This weekend I attended a memorial service for William C. "Bill" Blizzard, who died in late December at the age of 92. He was the son of West Virginia labor legend Bill Blizzard, who led the historic miner's march of 1921. The march, which culminated in an armed struggle between union supporters and coal company thugs known as the Battle of Blair Mountain, was the largest workers' rebellion in American history.

An activist himself who paid the price more than once for his convictions, Blizzard was a writer and photographer and, as strange as it may sound these days, a gentleman and a scholar. In 2004, he published the result of years of research into the WV labor struggles in the book When Miners March. May light perpetual shine upon him.