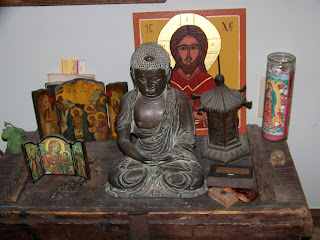 As noted in yesterday's post, traditional Buddhist teachings regard being born as a human as a rare and precious opportunity. Believe it or not, we could do way worse. Even more rare and precious is being born a human in a time and place where one can become aware of the Buddha's teaching or the Dharma.

By those standards at least, El Cabrero is pretty lucky. Although I was raised in and remain attached to the Episcopal Church, there was never a time in my life when I can remember not knowing who the Buddha was or at least what he looked like (according to traditional iconography anyhow).

My paternal grandfather spent many years in China, where my father and uncle were born. He wasn't a missionary, although he did become a priest when he returned. Though he died several years before I was born, the artifacts of his travels decorated the old family farm. Among these was a bronze statue of the Buddha and a prayer wheel. When my grandmother died, those were the only things I asked for.

When I was a child, while everyone at the old home place adhered to the 1928 Book of Common Prayer, the Buddha was always spoken of with deep respect, as were other elements of Chinese culture. I wound up being drawn to and equally comfortable with each. They are not identical, but I've found them to be complimentary and the tension between them to be interesting.

A wise old priest once told me that creative tensions were what made things like Gothic cathedrals work and that Christianity itself was the product of creative tensions between the Hebrew and Hellenistic traditions.

THE (GLOBAL) PURSUIT OF HAPPINESS. A worldwide study of the subjective sense of well-being finds that it tends to be higher in places with less poverty, better health care and access to education. Who would have guessed?

A VERY UNMERRY BIRTHDAY. NAFTA turned 15 on Jan. 1. Ordinary folks on either side of the US-Mexico border weren't big winners.

CURIOUSER AND CURIOUSER. From the Wall Street Journal, here is a brief description of some rare but interesting neurological disorders.

THESE ARE YOUR BEES on drugs.