The barbarian from the west 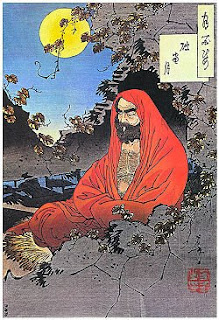 Bodhidharma, the monk who brought Zen Buddhism to China, from an 1887 woodblock by Yoshitoshi. Image courtesy of wikipedia.

Although I'm not a card-carrying Buddhist, I've been a student of it for many years. As I mentioned in earlier posts this week, I was aware of the Buddha from early childhood, thanks to the artifacts of wandering grandparents. But it was another major figure from Buddhist history who had the most immediate impact on my life.

When I was a kid, like many boys, I was interesting in fighting--especially in exotic fighting arts from Asia. This was just before the big kung fu boom in the early 1970s. At the time, I could find no affordable place to study so I read everything I could get my hands on.

Many books about karate and kung fu (aka gung-fu, wushu, kuoshu, etc.) then and now relate a legend that says these arts were founded by a wandering monk who made the hazardous journey from India to China to promote a new Buddhist teaching (Zen in Japanese, Chan in Chinese, and dhyana in Sanskrit).

It was said that this monk (Bodhidharma in Sanskrit, Tamo in Chinese, Daruma in Japanese) arrived at the now famous Shaolin Temple and found the monks there to be too weak to progress in meditation. He was said to have taught them a series of exercises for health and self defense that would eventually become the basis for Shaolin kung fu and the many arts it influenced.

Now this story is more a matter of legend than fact but I did get something out of it at the time which was worth keeping: the idea that mind and body were essentially one and the same and that one can't develop one without the other.

Later, I went on to investigate the other, older legends about Bodhidharma which were entertaining and colorful in their own right. About which more tomorrow.

WEST VIRGINIA SUPREME JOKE. The ripples just keep getting wider and wider over the scandal involving WV Supreme Court Justice Brent Benjamin, Massey Energy, and its CEO Don Blankenship. All kinds of groups, including (Wal-Mart!) have weighed in saying that it looks tacky for a justice whose seat was purchased by a corporate pal to rule in favor of that corporation.

FEAR OF SUCCESS may be driving the anti-stimulus crowd, economist Dean Baker argues.

MYTHS OF DE-REGULATION. Regulation of some kind is going to happen--it's a question of who benefits.

IN PRAISE OF MELANCHOLY. Happiness is fine, but the blues have their place.