Good for the soul 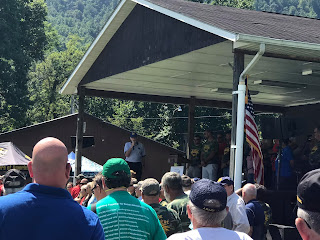 These really are hard times. I don't know many people from any end of any spectrum who aren't a bit stressed out nowadays. But one recent dose of soul medicine for me came in the form of the United Mine Workers union Labor Day rally in Racine, WV. I've been going to those off and on for 30 years.

It was really weird and sad to be there without seeing, talking with, and listening to my dear friend Elaine Purkey, a labor singer and songwriter who performed there pretty much every time until she died of COVID last year at around this time. Here's what I wrote about her when she passed. I took that hard.

This year was different and special in that Labor Day coincided with the 100th anniversary of the Battle of Blair Mountain, the largest workers' insurrection in American history (so far...), when 10,000 miners marched across southern West Virginian to gain the right to organize. Some UMWA members and supporters retraced that march this year.

It was great to be around working class people committed to fighting for a working class agenda. I hope that all the efforts to commemorate past struggles help people commit to those of today. Things were rally bad here 100 years ago. Progress was made--and lost.

I'm so old-fashioned that I believe the only hope for the world is the solidarity of the diverse, multi-racial and international working class, even if part of it has lost its way for the time being. I know that without it, we aren't going anywhere.

I think we are at a pivotal point in history and it's going to be a close one.