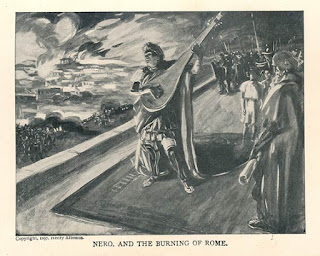 The old story goes that the mad Roman emperor Nero fiddled while Rome burned, a disaster that he blamed on the early Christians, who paid for it with some nasty persecution.

In fairness to Nero, however, this didn't happen. At least the fiddle part, since these weren't made until the Renaissance era. If he played anything, and I'm not saying he did, it would have been a kithara, a harp-like stringed instrument whose name morphed into guitar.

But that's not important right now. The meaning of the saying is about how some people in power cheerfully ignore the sufferings of others.

A case in point of the latter is congress dithering around rather than passing another round of COVID relief in the face of massive unemployment, hunger and suffering. This post from the Center on Budget and Policy reminds us that as this Thanksgiving approaches, less than half of all American households are confident about their ability to afford food in the days ahead.

In West Virginia, that's 57 percent, with 12 percent reporting having trouble feeding kids now and 9 percent not at all confident about the future. All around West Virginia, people are making heroic efforts to ensure access to food, but that's no substitute for meaningful action related to food security, housing assistance, unemployment, and help with utilities.

It's way past time for action.

(Meanwhile, speaking of Roman emperors, it seems like Caligula is alive and well in the USA.)