May Day: Born in the USA 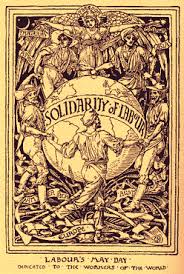 Happy Beltane, May Day and International Workers' Day! The first was a Celtic holy day. The second was a traditional European spring festival with pagan overtones. You could even say it was kind of Freudian...can you say May poles and fertility?

As for International Workers' Day, folks, especially in the Cold War era, associated it with Soviet communism and the militaristic parades that used to fill Red Square in Moscow. It might be good to recall that the May Day labor celebration grew out of efforts to establish the eight hour workday right here in the USA. It was only later that the day was adopted by the international labor and socialist movement.

A major struggle in much of the 19th and 20th century has been to reduce the hours of the working day, which could run as long as 14 hours or more in the early days of the industrial revolution.
A slogan of the movement was "eight hours for work, eight hours of sleep and eight hours for what we will."

Like everything else in the history of the struggle of working people for basic human justice, the fight goes on. The fight has always been about more than wages, hours and working conditions, as important as these are. It's also been about the need for culture, rest, leisure, education and dignity.

Lately, this hasn't been going so well, as you may have noticed. But it's not over yet.

Finally, here's a shout out to the frontline workers who have walked off the job today to call for safe working conditions, a living wage and respect.

(Note: some of this was cobbled together from older May Day posts.)