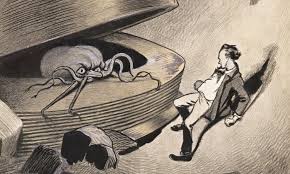 In H.G. Wells’ War of the Worlds, the octopus-like Martians almost wiped out humanity — until they died from infection from earth’s micro-bugs.

One might think if Martians could develop space travel, they’d have thought about germs too, but that’s not important now. The point is that things too small to see can have a huge impact.

I’ve been thinking lately about how outbreaks have often changed the course of history.

Let’s start with the Bible. Aside from the plagues of Egypt in Exodus, an example is related in 2nd Kings and elsewhere about the Assyrian siege of Jerusalem.

The Assyrians were probably the most brutal empire in the ancient Middle East, with detailed artwork depicting torture and mass executions. They ended the northern kingdom of Israel in 722 B.C., deporting and resettling many of the survivors aside from the Samaritans, giving rise to speculation about “lost tribes of Israel.”

The same almost happened to the kingdom of Judah around 701 B.C. When things seemed hopeless, the invaders were hit by a mouse-borne epidemic, a story backed by ancient Greek historian Herodotus centuries later.

No Judah would have meant no rabbinical Judaism or Christianity.

An outbreak in Athens around 430 B.C. helped end the glory days of ancient Greece. After the Greeks defeated the Persians, Athens went to war with Sparta and its allies. The Athenians were a sea power while the Spartans were strongest on land.

Athenians brought in citizens from outlying areas, staying supplied by sea while Spartans burned their farms and fields. Overcrowding made sanitation worse, leading to an outbreak described in detail by Thucydides, an Athenian general and historian who barely survived it.

There’s debate about the disease, but we can just say it was bad. According to Thucydides, “Words indeed fail one when one tries to give a general picture of the disease; and as for the sufferings of individuals, they seemed almost beyond the capacity of human nature to endure.” Demoralized people “became indifferent to every rule of religion or law.”

Tens of thousands died, including the great political leader Pericles. While the war would drag on for 27 years, Athens never recovered and was ultimately defeated. War exhausted the winners as well. It wasn’t long before Greece was dominated by the Macedonians under Philip and his better-known son, Alexander the Great.

Rome had its outbreaks, the worst coming in 541 A.D., after it converted to Christianity. The emperor Justinian wasn’t exactly good, but he was the last to be called “the Great.” The empire had two capitals, the western in Rome and the east in Constantinople, now Istanbul, Turkey. The west fell under “barbarian” domination, but Justinian came close to reuniting it, also engaging in diplomacy and war with the Persian superpower to his east.

Then came bubonic plague, carried by fleas on rats in grain shipments from Egypt. It raged off and on for around 200 years, killing 25-50 million people.

Any hope of reuniting the empire was gone, paving the way for the rise of Europe as distinct countries rather than imperial provinces. One place largely untouched was Arabia. Islam was soon to spread through plague-weakened regions as far as the Iberian Peninsula in the west and Persia and beyond in the east.

Plague would return to Europe around 1350, recurring in waves, by some estimates wiping out more than half the population. Some historians believe it killed feudalism and helped prepare the way for the rise of capitalism and Protestantism.

When Europeans encountered indigenous people in the Americas, Old World diseases such as smallpox, chicken pox, cholera, tuberculosis, mumps and measles wiped out huge portions of the population, far more than the considerable violence of the “discoverers.” The late Yale historian David Brion Davis called it “the greatest genocide in the history of man.”

Cortez’s small band of gold-hungry murderers wouldn’t have been able to conquer the huge Aztec city of Tenochtitlan (now Mexico City) in 1520 without the help of a smallpox epidemic that reduced the population by an estimated 40%.

Yet another epidemic made possible the expansion of the young United States and saved the world’s first victorious slave uprising. In the early 1800s, Napoleon sought to reimpose slavery in Haiti after a victorious uprising. Haitians fought back fiercely, aided by yellow fever, a mosquito-bourne virus brought from Africa during the slave trade. The French had never before been exposed to the disease. Their expeditionary force was wiped out. To raise money to recover, Napoleon sold the U.S. territory claimed by France for $15 million in what became known as the Louisiana Purchase. This nearly doubled the size of U.S. territory.

Epidemics weren’t done with Napoleon. In 1812, he invaded Russia with his Grand Armee of around 500,000 soldiers. Invading Russia is about as good an idea as invading Afghanistan. In addition to resistance by Russian soldiers, civilians and “General Winter,” the French were struck by lice-bourne typhus. As many as 400,000 invaders died, with typhus killing the majority. Who knows what a different outcome would have meant for Russia. Perhaps there would have never been a Stalin.

These are just a few examples of how microbes have shaped history. While we’re lucky that COVID-19 isn’t nearly as lethal as previous epidemics, it’s a safe bet that it will leave huge and lasting changes in its wake.

It’s up to us to decide what kinds of changes those will be.

(This ran as an op-ed in the Charleston Gazette-Mail.)
by El Cabrero