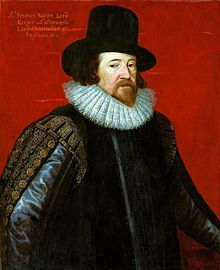 It's interesting how references to animals show up in philosophy. Plato put in a good word for some dogs in The Republic, comparing their traits of bravery and loyalty to guardians of the ideal city.

Hegel remarked that the owl of Minerva (Roman name for the Greek wisdom goddess Athena) "spreads its wings only with the falling of dusk." I take that to mean that we mostly figure things out when they are over--or when it's too late.

Wittgenstein said that if a lion could speak we couldn't understand him (I disagree with him for reasons elaborated here).

Isaiah Berlin wrote a famous essay about foxes and hedgehogs, quoting a Greek poet as saying that "The fox knows many things, but the hedgehog knows one big thing."

I recently stumbled on another philosophical animal reference from Francis Bacon (1561-1626) from his New Organon:

Those who have handled sciences have been either men of experiment or men of dogmas. The men of experiment are like the ant, they only collect and use; the reasoners resemble spiders, who make cobwebs out of their own substance. But the bee takes a middle course: it gathers its material from the flowers of the garden and of the field, but transforms and digests it by a power of its own. Not unlike this is the true business of philosophy; for it neither relies solely or chiefly on the powers of the mind, nor does it take the matter which it gathers from natural history and mechanical experiments and lay it up in the memory whole, as it finds it, but lays it up in the understanding altered and digested. Therefore from a closer and purer league between these two faculties, the experimental and the rational (such as has never yet been made), much may be hoped.

I don't usually think of myself as a Bacon fan, but that is a pretty good way of stating the need for balance between data and perspective.

Plus, bugs are cool.