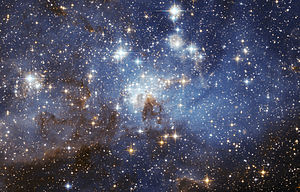 This is a busy time for El Cabrero, so rather than hunt up stuff to post each day, the theme for this stretch is the work of Ralph Waldo Emerson, whose essays and poems had such a huge influence on much of American life and letters in the mid 1800s. This week, we're looking at his essay Nature, in which he makes more than one good point.


To go into solitude, a man needs to retire as much from his chamber as from society. I am not solitary whilst I read and write, though nobody is with me. But if a man would be alone, let him look at the stars. The rays that come from those heavenly worlds will separate between him and what he touches  One might think the atmosphere was made transparent with this design, to give man, in the heavenly bodies, the perpetual presence of the sublime. Seen in the streets of cities, how great they are! If the stars should appear one night in a thousand years  how would men believe and adore, and preserve for many generations the remembrance of the city of God which had been shown! But every night come out these envoys of beauty  and light the universe with their admonishing smile.


It really is true that if these celestial lights were only visible once in a great while we would give them more of the attention and reverence they deserve. The same is no doubt true of many other things.

WAR ON COAL? Whatever.

I don't know about that quote.

I find an incredible amount of solitude in my chamber, unless somebody is wanting in there to take a bath, or wash their hands or something.