An occult relation between man and the vegetable 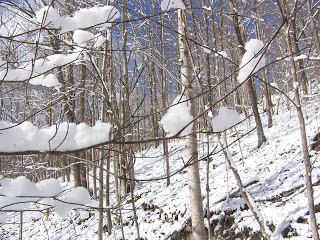 One of my favorite Dylan songs is an early acoustic effort, Lay Down Your Weary Tune, which is about how the music of nature outdoes any human effort. The chorus goes,

Lay down your weary tune, lay down
Lay down the song you strum
And rest yourself 'neath the strength of strings
No voice can hope to hum.


Around here, a lot of the best music comes from the wind through the trees. Dylan put it this way,


Not surprisingly, Emerson noticed that in his early essay Nature,

The greatest delight which the fields and woods minister, is the suggestion of an occult relation between man and the vegetable. I am not alone and unacknowledged. They nod to me, and I to them. The waving of the boughs in the storm, is new to me and old. It takes me by surprise, and yet is not unknown. Its effect is like that of a higher thought or a better emotion coming over me, when I deemed I was thinking justly or doing right.


MOMENTUM. The big political news yesterday was the announcement that Republican governor Rick Scott of Florida, a major foe of the Affordable Care Act, intends to expand Medicaid coverage to low wage workers in that state. That makes him the 7th Republican governor to make that decision. Meanwhile, West Virginia's Democratic governor, Earl Ray Tomblin, hasn't made his decision yet. I hope this makes it easier.

FOLLOWING THAT THREAD, this item from Politico highlights the conflicts the Affordable Care Act has caused among Republican governors between pragmatists and ideologues.

PRISON REFORM should also be on the agenda in WV now. Here's a call for making it better.