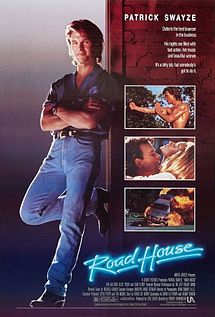 When the Spousal Unit is on the road, I sometimes, when not completely overcome with grief and longing, watch videos that she would not be very interested in. This is how, for example, I got through the Sopranos. This week, I watched one that people who know of my fondness for the martial arts (and soft spot for movies about them) have been urging me to for some time.

To wit, Roadhouse starring Patrick Swayze, which apparently has quite a following and is a particular favorite among club bouncers. It was a pretty fun film, complete with a cartoon character bad guy, vehicles with giant wheels, romance and lots of smashing things.

There were plenty of fights and they were pretty big, but they were nothing in comparison with the hair. This film was released in 1989, which apparently was the golden age of the mullet. Patrick had one that couldn't be beat, although the one worn by his love interest played by Kelly Lynch came pretty close.

The big hair thing faded out most places by the early 90s, although it persisted in southern West Virginia a good bit longer than that.

Anyway, it was an entertaining cultural artifact. Now I feel like a better person.

(Technical comment: the throat technique used by Patrick could probably cause death in some cases, but I seriously doubt it would break the skin in the way depicted.)

TWO FOR THE ROAD. Most Americans believe the rich pay too little in taxes and most would support raising taxes to make Social Security viable into the future.