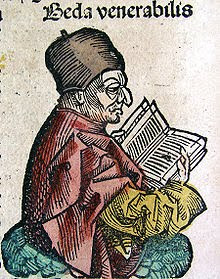 The English church historian Bede, from a 1493 illustration.

The theme here lately is Beowulf, although you will also find links and comments about current events below. One of the interesting things about that poem is the light it sheds on religion in the Anglo-Saxon world.

It would seem that when these Germanic tribes invaded or migrated to England in the 500s, most of them were pagan and held to some variety of Norse religion, which survives in such places as the names of several weekdays (Tuesday, Wednesday, Thursday, and Friday are named after gods). An effort to convert them to Christianity got into high gear around the year 600, give or take a few.

Unlike in other places, it seems to have taken place without much in the way of martyrdoms on either the Christian or pagan side. Maybe one reason why Christianity appealed to them was that it offered a less dark view of the world than the old religion. In Norse mythology, gods, humans and the whole shooting match were expected to go down in a cataclysm known as Ragnarok.

According to the Venerable Bede (circa 672-735), an early chronicler of English church history, a pagan priest was consulted about the new religion and he was fairly open to it. Bede says that he described the human condition thus:

The present life man, O king, seems to me, in comparison with that time which is unknown to us, like to the swift flight of a sparow through the room wherein you sit at supper in winter amid your officers and ministers, with a good fire in the midst whilst the storms of rain and snow prevail abroad; the sparrow, I say, flying in at one door and immediately another, whilst he is within is safe from the wintry but after a short space of fair weather he immediately vanishes out of your sight into the dark winter from which he has emerged. So this life of man appears for a short space but of what went before or what is to follow we are ignorant. If, therefore, this new doctrine contains something more certain, it seems justly to deserve to be followed.

If that isn't one of the world's best analogies, I don't know what is. But if I was the sparrow, I'd have stayed in the mead hall.

THIS IS OUR CONCERN, DUDE. Some economists warn that spending cuts and freezes advocated by President Obama and his "friends" in Congress could be the real job killers. Here's another take on it while we're at it, along with Dean Baker's response.

ROADBLOCKS. Here's Jeff Goodell, author of Big Coal, in a Rolling Stone article on the 12 politicians who are doing the most to block progress on dealing with climate change. West Virginia's senior senator made the list, which makes me wonder if our junior senator is jealous. One startling change from the past is that Don Blankenship didn't make the list this time. The former CEO of Massey Energy appears to be taking a time out. Thanks to Ken Ward's Coal Tattoo for the heads up.

GOOD TO KNOW. Legislators in Utah may soon make the M1911 the official state gun.

ON THE BRIGHT SIDE, optimism in America is at a four year high (which may not be saying much).

RE: Obama's SOTU and austerity

I thought his speech sounded great but sort of went against my experiences.

How many private businesses in WV are dependant on people on Disability, Food Stamps, Teachers, or other Gov't employees salaries for a high % age of their business?

I can see the austerity BHO is pushing as a sign he's succumbed to the BS supply side argument of the wingnuts and tea baggers.

Also I found it a little insulting that he insinuated that our laziness and poor educational system is responsible for our economic troubles.

As a West By God Virginian how many friends with degrees do you know that had to move out of state to get a job???

Wasn't there an article in the paper a few mo ago that said the majority of jobs in WV in the near future would not even need a degree??

Oh and his pandering to the lawsuit reform crowd just sickens me. Remember when the WV Legislature passed reform at Manchin's urging. I saw ZERO effect on my insurance premiums!

Tort reform is "socialisim" and if you want malpractice suits to stop you INCREASE the premiums so maybe the doctors will operate a little more carefully and the nurses will wash their hands??