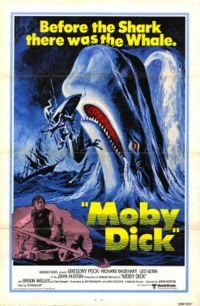 Note: this post was intended to come out Friday, April 17, but I got the date wrong. I apologize to email subscribers for any inconvenience.

Lately the theme at Goat Rope has been literature and its role in enriching life and work. Here's a personal example:

El Cabrero has never sailed on a whaling ship, nor am I likely to do so at this point. But I love Melville's Moby-Dick. It's one I keep going back to every few years. One thing they may not have told you in English class is that quite a bit of that book is laugh out loud funny, in a dark kind of way.

Moby-Dick is a great example of my definition of a great story as something you can find as well as lose yourself it. At different points in my life, it felt like I wasn't just reading it--I was living it. I've been several different characters in turn.

Like Ishmael, I sometimes find it to be a "damp, drizzly November in my soul," the kind of mood in which I

find myself involuntarily pausing before coffin warehouses, and bringing up the rear of every funeral I meet...

Like him, I've sometimes found that on such occasions,

it requires a strong moral principle to prevent me from deliberately stepping into the street, and methodically knocking people's hats off...

(Usually that's a sign that something needs to change.)

And like him, I've found water--even a little creek--to be mesmerizing, since "meditation and water are wedded forever."

Sometimes I get in Ahab mode. My leg was never bitten off or otherwise amputated by a white sperm whale, but I have been bitten by poverty and never quite got over it. It made me want to hunt the beast down whenever the opportunity occurs. There is that inscrutable something in every instance of injustice gets me going:

All visible objects, man, are but as pasteboard masks. But in each event — in the living act, the undoubted deed — there, some unknown but still reasoning thing puts forth the mouldings of its features from behind the unreasoning mask. If man will strike, strike through the mask! How can the prisoner reach outside except by thrusting through the wall?

At other times, I've played the role of first mate Starbuck by trying to talk other people down when they're ramped up to Ahab mode. Then there are the days when I feel like poor mad Pip.

And, while I officially disapprove of whaling, I do know the savage thrill of the hunt, of scanning the horizon for some kind of opening and yelling "There she blows!" when one occurs.

Bottom line: I've found that both reading and life are more fun and interesting when they are integrated.

HAVE WE HIT BOTTOM? Maybe, maybe not.

I PREFER COFFEE, CONTINUED. Here's a good blog post on some taxing issues by Greg Coleridge, an AFSC co-worker of mine in Ohio.

ON THAT NOTE, here's more on the subject by economist Dean Baker and the Economic Policy Institute.

WRITING ABOUT VALUES seemed to help some students boost their grade point averages.

I love Moby-Dick too. I had a teacher who recommended it as one of his favorite books, and so last summer I finally sat down and read it. I too was delighted by the strange-but-hilarious humor. Hardly anyone I know (who's my age) has read it though, and that bothers me. I hate to, but I think that a non-necessary downside to the current speed of advancing technology and the world is that people have forgotten how to read big, slow books like Moby-Dick. We can be taught this kind of literacy again, and I really hope someone gets on that, because folks are missing out.

Also, I need more people to discuss this book with.

Congratulations for having the guts to try Moby-Dick--let alone finish it! I think you're right that big slow books seem at a disadvantage in an age of twitter and texting.

On the bright side, a lot of these big slow books are electronically recorded and can be heard on walkmans, ipods, etc.

It's kind of like getting read to, plus it's nice to listen when jogging, mowing, doing dishes, etc.

I encourage you to give Moby another look in a few years. I always keep finding more and more in it.