Sparring as a spiritual practice 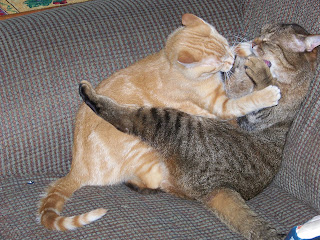 As I mentioned yesterday, I think people who want to make the world a less nasty place could do worse things than study some martial arts, especially those that practice realistic sparring with skillful opponents.

After all, most efforts to change or preserve things involve some kind of struggle, however nonviolent, with powerful people and institutions who are not there to grant one's every wish.

One lesson I will always remember came early in my karate career. I had just found a new dojo after the one I started in closed. These people LOVED to spar, in class, in tournaments and elsewhere. While control was emphasized, it could get pretty rough as consenting adults moved up in rank and experience. And, although I didn't realize it at they time, their "rules" were pretty realistic.

This was the first time I did any serious sparring with a woman black belt. At the time, I was a green belt, which is to say someone who knows just enough to be a danger to himself.

I decided to dazzle her with high kicks, my speciality at the time. While my feet were flying around at head level, one of hers landed in my nether regions. This was the closest I ever came to qualifying for the Vienna Boy's Choir. I hit the ground like a ton of bricks, but must have gotten up at some point.

This is one of the invaluable lessons you learn by sparring with people who know how to fight: you learn to think defensively. Specifically, you make it a habit to always think what a good opponent could do to you if you did this or that technique.

That's one that carries over well into organizing. It is a good practice to always think what an intelligent opponent would be able to say or do in reaction to anything you say, do or write. I've often seen groups undertake actions that make it easy for opponents to attack or dismiss them.

I learned the hard way that if you present your opponent with an opening, you shouldn't be surprised if they take it. And I'm not above returning the favor.

THE BUTCHER'S BILL. Here's an estimate of the human cost of the Iraq war.

I MEANT TO BLOG THIS YESTERDAY. Here's Krugman on bailout blunders.

CULTURAL CHANGES accompany this recession, not all of which are bad.

THE DAY THE MUSIC DIED. "American Pie" songwriter Don McLean discusses Buddy Holly here. So that's what the song really was about. Kind of.

TEARS AND SUCH. Here's an item on how early experience shapes our views of crying.

I learned from judo that, even with mats on the floor, being thrown can hurt. I learned from tia che that there were some muscles in my body that I had never before used.

Hey Nick,
I didn't know you had done that. When I was doing judo regularly, I could qualify for frequent flier miles. But for real, one lesson you get from things like that is dealing with pain and carrying on.