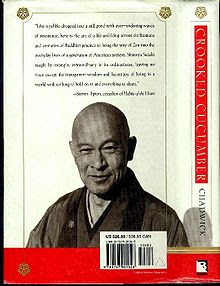 Zen master Suzuki Roshi made the concept "beginner's mind" a common phrase in the US. Image courtesy of wikipedia.

There are a lot of great Japanese words that don't translate well directly into English. One that I like a lot is "shoshin," which literally kind of means "first mind" but is usually translated as "beginner's mind."

The word was made famous by Zen master Shunryu Suzuki's book Zen Mind, Beginner's Mind, where he said

The importance of shoshin is another lesson that got drummed into my head and other body parts over decades of practicing the martial arts and of sparring.

In training, some of the toughest and most dangerous people to spar with are not experienced martial artists--they are new people who walk in off the street. You kind of know what to expect from people who have been training a while--there are conventions everywhere, after all. But some of these new people would do wild and crazy things that would never have occurred to me. They can really catch you by surprise--thanks to having a beginner's mind.

I've often found that I actually fought better after I'd stopped training for a while and then went back. This was because the ties of old habits got weaker in the meantime and I wasn't as stuck in old ruts. Beginner's mind again.

Sometimes the Spousal Unit, La Cabra, will attack me with totally random kicks, punches and throws that look so bizarre that I can't defend against them because I don't recognize them as legitimate techniques. Ditto beginner's mind.

It's really easier to fight somebody when you know what they're going to do because they are creatures of habit. And it's easier for you to lose if you always fight the same way. The advantage of sparring with lots of good fighters is that they will continually force you to adapt and improve, provided you don't give up.

I think people who work for social justice could benefit from trying to keep a beginner's mind and approach each situation with a fresh start, even if it's just another chapter in a long drawn-out struggle. It's easy to defeat, dismiss, and label people and groups that get stuck in the same old rut.

As Henry David Thoreau put it in Walden,

It is remarkable how easily and insensibly we fall into a particular route, and make a beaten track for ourselves….The surface of the earth is soft and impressible by the feet of men; and so with the paths which the mind travels. How worn and dusty, then, must be the highways of the world, how deep the ruts of tradition and conformity!

A GOOD DEED FOR TODAY. Call your senators toll-free at 1-800-473-6711 and urge them to support President Obama's economic recovery proposal and not to make substantial cuts in programs that could help put the country back to work. The number is provided by the American Friends Service Committee.

WHAT HE SAID. Here's Paul Krugman talking sense on the economic recovery package.

THE RECESSION AND THE ELDERLY. It's hitting pretty hard, according to his issue brief from the Economic Policy Institute.

THE CHANGING FACE OF GREEN. Here's an interview with Van Jones, author of The Green Collar Economy.