Regarding that upon which even kings must sit 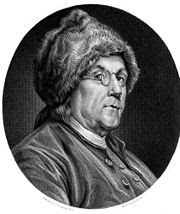 Franklin loved to pretend to adoring Parisians that he was a backwoods sage. Image courtesy of wikipedia.

El Cabrero has been thumbing through Benjamin Franklin's Poor Richard's Almanac lately in search of bloggable nuggets. The ever busy Franklin began publishing it as a young man in 1733 and kept it up for around 25 years.

Even when he ceased writing for it in 1758, his career as a revolutionary was still a good way off. However, you can find some healthy skepticism about monarchy and the pride of the powerful in the Almanac.

Here are some samples, beginning with my favorite:

The greatest monarch on the proudest throne
is oblig'd to sit upon his own arse.

In the 1930s, the late great Woody Guthrie reminded us that some will rob us with a six gun and some with a fountain pen and in the 1980s Bob Dylan sang that "steal a little and they throw you in jail/steal a lot and they make you king." Poor Richard got there first:

Robbers must exalted be,
Small ones on the Gallow-Tree,
While greater ones ascend to thrones,
But what is that to thee or me?

And here are some more:

In rivers and bad Governments
The lightest things swim at the top.

Many princes sin with David
but few repent with him.

You may give a man an Office
but you cannot give him discretion.

OUCH. The latest unemployment numbers are worse than many expected.

CLEAN COAL? Not so much.

THE HUMANITIES are up against it in the wake of the recession.