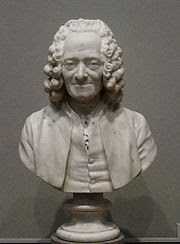 El Cabrero has been combing through Benjamin Franklin's Poor Richard's Almanac lately in search of bloggable nuggets. I found a few items on the subject of religion that seemed worth a look.

Franklin, like many people in his generation, tended towards Deism, a rationalist outlook that believed that God figuratively speaking wound up the world's clock and then got out of the way (although he tried not to antagonize those with more traditional beliefs).

Most Deists rejected miracles and any revelation other than reason, although they tended to support rational moral virtues and many believed in some kind of afterlife. They tended to believe that God did not intervene in the world's affairs, other than by giving people the use of reason. As Voltaire put it,

Deism can be seen in part as a rejection of the dogmatism and fanaticism that led to so many of the wars and religious persecutions in European history. This quote from the Almanac pretty well expresses that:

Many have quarreled about Religion
That never practiced it.

Ain't that the truth?

Here are some more:

A good example is the best sermon.

None preaches better than the ant,
and she says nothing.

(Ben had the Protestant work ethic out the wazoo...)

Here's one for the road:

Don't judge of men's wealth or piety
by their Sunday appearances.

A DIFFERENT KIND OF BUDGET BATTLE from those waged during the Bush administration looms. The NY Times reports that President Obama's proposed budget will call for closing tax breaks for the wealthy to expand health coverage and a serious approach to climate change.

ECONOMISTS TALKING SENSE. Thirty-nine prominent economists have signed on to a statement in support of the Employee Free Choice Act. They also took out a full page ad to that effect in the Washington Post.

BANK ON IT. El Cabrero is a fan of the work of Nassim Nicholas Taleb, author of The Black Swan: The Impact of the Highly Improbable. Here's his take on the banking mess. And here are his words of wisdom:

Indeed, the incentive system put in place by financial companies has produced the worst possible economic system mankind can imagine: capitalism for the profits and socialism for the losses...

No incentive without disincentive. And never trust with your money anyone making a potential bonus.

ON THE BRIGHT SIDE. The economy may be tanking, but shark attacks are down.