Planning to be spontaneous 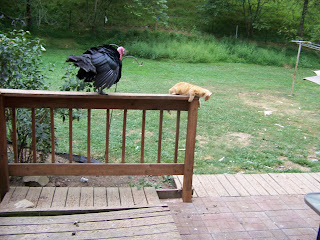 Wu (right) did not plan on getting chased by Diego the turkey.

El Cabrero is kind of a policy wonk by day, with a special interest in how laws and such impact people with low and moderate incomes. Every so often, I have to take part in attempting to do strategic planning.

(Actually, my main plan is to try to have a strategy.)

I don't have anything against real or pretend planning as long as people understand that in real life one has to adapt and adjust on a moment by moment basis.

There are two military sayings that are worth keeping in mind even for peaceful folks. One is "No plan survives contact with the enemy." The other is "The enemy gets a vote." You can substitute the word enemy with any number of other words: future, unforeseen random events, reality, life, etc.

In planning to deal with something as intricate and complicated as public life and policy, it's important to keep two basic things in mind. If the Gentle Reader will forgive me for stating the obvious, here they are:

1. We can't predict the future with any degree of certainty; and

2. We don't control other people.

It's actually even worse than that. Not only can we not predict the future, but we also have an incomplete understanding of the past, even though we often use it to anticipate events.

History is in large measure story--and humans secrete stories the way the liver secretes bile. If you ask just about anybody why just about anything happened, he or she will probably come up with some kind of explanation which may or may not have any basis in fact.

There's an awful lot we don't know about the present, come to think of it. And not only do we not control other people (which is probably a good thing), but we are all imperfect in self control.

The take-home message is that no matter how well we plan, there's no getting away from randomness, unpredicted events, luck, chance or fortune. It's how we respond to such things that often makes the difference between success and failure.

WHAT ABOUT A BAILOUT for the rest of us?

ATLAS MESSED UP. Here's another take on the fallen idol of Ayn Rand. (By the way, anyone really into Greek mythology would have known that Atlas wasn't the brightest crayon in the box.)

WHERE THE RUBBER HITS THE ROAD. The coming winter means more hard times for people in economic difficulties. In nearby Ohio, the equivalent of one in ten households has received a gas or electricity termination notice in the last year.

IN OTHER CHEERY NEWS, the financial meltdown is also making the global food crisis worse.

Your pearls of wisdom this morning were really good. I had to print them out and save them. Sounds a little unlike your usual writing, but I sure liked it.


Even reminded me a
little of Stephen King.

Thanks! I'm on a jag about planning, strategy and luck these days.

But if I may ask, what part reminded you of Stephen King? (And by the way, the last 7 years have kind of reminded me of The Stand.)