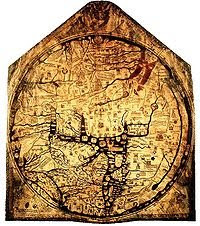 Medieval map of the world. Image courtesy of wikipedia.

One way that people can get in big trouble is by falling in love with their theories (or believing their own propaganda). In The Black Swan: The Impact of the Highly Improbable, Nassim Nicholas Taleb refers to this as Platonizing or Platonicity.

For the ancient Greek philosopher Plato, Ideas or Forms were more real than the world of the senses. Most people wouldn't go that far these days, but there is a persistent tendency for people to take their model of the world for the world itself.

It's an all too human thing to construct working models of how the world works. In fact, most of the time, these models may work pretty well. But the tricky thing about our world is that it is under no obligation to act in a way that meets our expectations.

As the Polish-American scientist Alfred Korzybski famously put it, "the map is not the territory." The Gentle Reader may have discovered this for him- or herself while attempting to drive to a new destination with a map downloaded from the internet.

As Taleb puts it, Platonicity

is our tendency to mistake the map for the territory, to focus on pure and well-defined "forms," whether objects, like triangles, or social notions, like utopias (societies built according to some blueprint of what "makes sense"), even nationalities. When these ideas and crisp constructs inhabit our minds, we privilege them over other less elegant objects, those with messier and less tractable structures...

Platonicity is what makes us think that we understand more than we actually do...Models and constructions, these intellectual maps of reality, are not always wrong; they are wrong only in some specific applications. The difficult is that a) you do not know before hand (only after the fact) where the map will be wrong, and b) the mistakes can lead to severe consequences. These models are like potentially helpful medicines that carry random but very severe side effects.

Some healthy skepticism is called for, even about our most cherished ideas.

SHOP TILL WE DROP? That may have just happened, according to the latest reports on consumer spending.

SPEAKING OF WHICH, here's economist Dean Baker's take on the data.

THE BIOLOGY OF HATE. Scientists may have identified the brain's "hate circuit." Meanwhile, lots of people seem to have already found it.

URGENT ANCIENT PHOENICIAN UPDATE here. Short version: they got around.