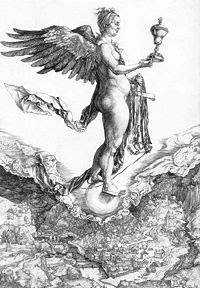 It's interesting that one of the Roman divinities to survive well into the Christian era was the goddess Fortuna, the personification of luck. This was the subject of Howard Rollin Patch's 1927 book, The Goddess Fortuna in Medieval Literature.

One of her symbols is her famous wheel, which was the inspiration of the TV game show Wheel of Fortune. It's not a bad image, which is probably why it has endured so long. As you've no doubt noticed if you've ever ridden a Ferris Wheel, as it spins along sometimes you go up and sometimes you go down.

As the ancient Roman writer Seneca put it in his tragedy Agamemnon,


Whatever Fortune has raised on high, she lifts but to bring low.

NO DIRECTION HOME. USA Today reports an increase in homeless families with children.

NO JOB EITHER. Business Week expects a bulge in layoffs in the wake of the recession.

BOOGIE NIGHTS. A "dinosaur dance floor" has been discovered in Arizona.

ECONOMISERY. Did forgetting Keynes contribute to the current mess? Maybe, as this item argues.

GET A ROOM. Scientists in England claim to have created the worlds most relaxing room.

VAMPIRISM 101. Everything you always wanted to know about animal vampirism can be found here.