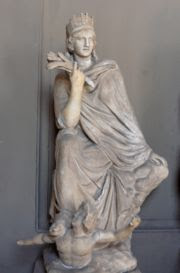 As luck would have it, El Cabrero has been thinking lately about luck, chance and randomness. It's interesting that many religious traditions and folk beliefs have attempted to divine the future through chance processes.

In the Hebrew Bible, it seems that divination was performed with urim and thummin, which were some kind of thingies connected with the breastplate of the high priest. In the New Testament Acts of the Apostles, the eleven remaining disciples cast lots to see who would be selected to fill the void left by Judas.

In the Chinese tradition, people threw yarrow stalks (or nowadays flip coins) to consult the I Ching, an ancient book of oracles. Many peoples have attempted to read signs from things like the flight of birds or the entrails of sacrificial animals. Cards have also been used for similar purposes. Even people who make fun of superstition sometimes flip a coin to make a decision.

Some traditions even make chance or luck into a divine figure. This was the case with the Greek goddess Tyche, in some versions the daughter of Zeus. While different sources dispute her parentage, she was viewed as helping to govern world events and was also associated with destiny.

One doesn't have to literalize mythology to recognize Lady Luck as a major factor in the world.

IT'S NO SECRET that hard times are often associated with acts of violence and other social problems. Here are some recent examples.

FROM THE ARCHIVES. Here's an interesting link about publications, pamphlets, and comic books from the American labor movement.

CLIMATE CHANGE could be happening faster than anticipated.

SEARCHING FOR GENGHIS KHAN. His tomb, that is.

SPEAKING OF TOMBS, archaeologists have excavated a "city of the dead" beneath Rome.