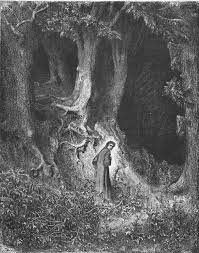 The state of the nation in the last few years is making me think more and more of Dante's Divine Comedy. This would be fine if it reminded me of the parts about Purgatory and Paradise, but I'm kinda stuck on Inferno now.

The very first line of the very first canto pretty well sums up the state of the nation, as spoken in the first person: "In the middle of the journey of our lives I awoke to find myself in a dark wood, having lost the true path."

As the Poet/Pilgrim tries to push through the brambles he is threatened by three predatory beasts: a she-wolf, a leopard and a lion. Rivers of ink have been spilled over what these symbolize, but the most convincing explanation to me mirrors the classification of sins and punishments in hell.

The upper level of hell is for the greed (he used the term "incontinence," but that has other connotations these days), represented by the she-wolf. Then comes the level of the violence, represented by the lion. The lowest level is that of fraud and deceptions, which leaves the leopard.

Lost in the woods and threatened by greed, violence and lies...that sounds about right. In the poem, he has to literally go through hell to get out of it....hmmm.

Dante is aided by two guides at different parts of the journey. His guide through hell and lower purgatory was Virgil, who arguably represents natural human wisdom and effort, which will only go so far. To make it to paradise, he needs the assistance of Beatrice, who represents divine grace and mercy.

We could use both right about now.