An anniversary of sorts 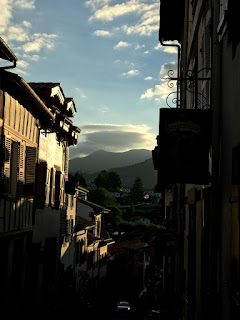 St. Jean Pied de Port in southern France
I get a bit sentimental at this time of year. Three years ago today, after going down the wormhole of the Camino de Santiago Compostela for several months, I set off from a WV Friends Gathering near Huttonsville in a rental car, dropping it off in Baltimore and catching a ride from a friend to the BWI airport.
Then followed a night flight with a brief stopover in Iceland, a morning landing at Charles DeGaulle airport near Paris and two more flights to Biarritz.  From there, it was an hour or so in a shuttle car to St. Jean Pied de Port in the Pyrenees, where my pilgrimage would begin. It was the beginning of 37 days of walking across northern Spain along the medieval pilgrimage route walked by millions since the 9th century (full disclosure: I took one day off from hiking after 33 straight days in the beach town of Finisterre on the Atlantic).
Including getting lost and other meanderings, I think it was around 640 miles across mountains and plains to the ocean, through rural Spain, small towns and a few major cities, sleeping at whatever place I could find at the end of the day, usually in unisex dorms called albergues operated by monasteries, churches, cities or individuals. It was a time of just bare living, with walking and seeing the only job at hand, punctuated by conversation, solitude, laundry, rough food, and Spanish wine.
Looking back I am reminded of my reasons for going, which were best expressed by Thoreau in Walden:

I went to the woods because I wished to live deliberately, to front only the essential facts of life, and see if I could not learn what it had to teach; and not, when I came to die, discover that I had never lived. I did not wish to live what was not life, living is so dear, nor did I wish to practice resignation, unless it was quite necessary. I wanted to live deep and suck out all the marrow of life…to drive life into a corner, and reduce it to its lowest terms, and, if it proved to be mean, why then to get the whole and genuine meanness of it, and publish its meanness to the world; or if it were sublime, to know it by experience ,and be able to give a true account of it in my next excursion.

Well, it was sometimes sublime and sometimes mean. There was a lot of  heat, pain, discomfort and fatigue. And a lot of beauty and wonder. And I must confess I spent an undue amount of time daydreaming about a no-holds-barred fight to the finish with the evil genius that designed the backpack I was carrying. But it did, at least for a little while, front the essential facts of life and drive it into a corner.