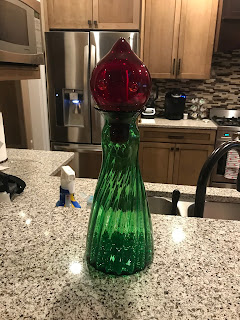 This monster was a present to my daughter.
A friend just sent me a link to a cool story in the Washington Post about how a 1950s monster sighting in Braxton County WV gave a boost to my hometown's Blenko Glass Company. But first a bit about both...

First, the century old Milton Glass company has always been a fixture for me. It's history is pretty cool, starting with the fact that it was founded by a British-born socialist who was a friend and devotee of Eugene Debs, a five time candidate for president on the Socialist Party ticket between 1900 and 1920, the last time while he was in prison for opposing World War 1. Blenko even wanted his ashes scattered on Debs' grave.

That's just part of the appeal. Another major element is the almost medieval process they still use to blow and shape molten glass by hand.

Back to the monster, in 1952 some people in Flatwoods saw a UFO and then a 10 foot tall monster with a blood red face. Some skeptics cook that down to a UFO and an owl, but whatever.

The point is that Blenko recently decided to make a limited commemorative critter that caught on like wildfire, apparently leading to the company's most profitable year in decades.

If demand for the Flatwoods monster diminishes, maybe West Virginia's other favorite monster, Mothman, might take its place.