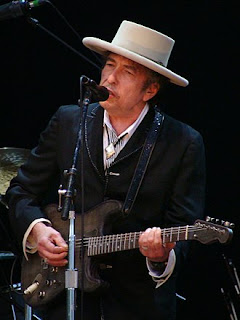 The man himself. Image by way of wikipedia
Today is Bob Dylan's birthday. It's kind of hard for me to believe that the person who has provided the soundtrack of my life (which isn't an unmixed blessing) just turned 80.

My first Bob exposure that I recall happened when I was 9 or 10 when my brother came home from college and played Blowin' in the Wind on an acoustic guitar. I'd have a strong reaction every time I'd hear him on the radio, not necessarily because he had a pretty voice, although I didn't mind it. It was more like the power of the word.

When I first heard Tangled Up in Blue, I just froze in my tracks. It got to the point for a few years that I'd check out a new Dylan album the way some people consult the I Ching. Sometimes I gauge how I'm doing in terms of Dylan albums (right now I'm somewhere between Oh Mercy and Love and Theft).

Sometimes I wonder whether he consciously wrote some of those lyrics or was just a channel of the Muses. In any case, I think Arlo Guthrie was right when he said that "Songwriting is like fishing in a stream; you put in your line and hope to catch something. And I don't think anyone downstream from Bob Dylan ever caught anything."

Yeah, he affected me the same way. My buddy's big brother had all the early Dylan albums so we were afflicted at an early age...