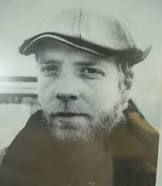 It's no secret that my favorite West Virginia writer is Breece Pancake from my hometown of Milton. If you know anything about him, you probably know that he took his own life in Charlottesville, Virginia on Palm Sunday in  1979.

By the time of his death, he had published some stories in The Atlantic and literary magazines. His book of short stories, appropriately titled The Stories of Breece D'J Pancake was put together posthumously and published in 1983 after massive efforts by his mother Helen Pancake, my friend and co-worker at the time, and author/teacher John Casey.

Although the last few decades hardly qualify as the Golden Age of short stories, Breece's book has never been out of print and has been translated into several languages. I was pleasantly surprised when a friend sent me this link to a recent post about him from The Paris Review by fellow West Virginia writer, by way of Buckhannon, Jayne Ann Phillips.

Breece D’J Pancake’s dozen stories, completed in the last four or five years of his life, include some of the best short stories written anywhere, at any time. Forty years of the author’s absence cast no shadow. The shadings, the broad arcs of interior, antediluvian time, are inside the sentences. The ancient hills and valleys of southern West Virginia remain Breece Pancake’s home place; the specificity and nuance of his words embody the vanished farms, the dams and filled valleys, the strip-mined or exploded mountains. His stories are startling and immediate: these lives informed by loss and wrenching cruelty retain the luminous dignity that marks the endurance of all that is most human.