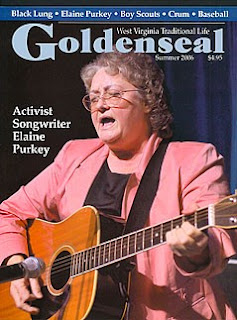 The labor movement and the people of West Virginia lost a powerful voice (literally) yesterday with the death of Elaine Purkey from COVID. Among other things, she was a singer/songwriter whose music has reached many around the US and beyond. And she was my dear friend.

We met during the Pittston coal strike of 1989-90, my first big fight after joining AFSC. Her husband Bethel was a grassroots union leader and Elaine was just finding her voice writing labor songs. It was wild and uncut class struggle: there were shootings, at least one fatal, burning buildings, vehicles smashed by nonunion coal trucks, evictions from company property, private gun thugs, state police and federal marshals, arrests, and a bit of the wooden shoe and black cat. Also music, laughter, humor, mischief and love.

(I’m not necessarily proud of this, but some of us were having the time of our lives.)

We did a lot together over the years, not just labor stuff, but also things like fighting racist police brutality and even doing mountain stories and songs with kids. It never took much to get her to whip out her guitar. She was very intuitive, like someone who could solve complex math problems without showing her work.

Sometimes I’d pitch her a bare song idea, which she’d weave into gold in short order. Her best song is One Day More (here’s the Smithsonian version), which was written in 1992 when 1,700 Steelworkers were locked out of the Ravenswood Aluminum Corporation for nearly two years.

A lot of people thought the fight was hopeless. I asked her to write something to boost morale and she came up with one for the ages in less than 24 hours. The first time I heard it, I knew people would be singing it after we were gone.

The Oscar winning filmmaker Barbara Kopple filmed the first performance at the union hall while doing a documentary for PBS on the lockout (I think you can see the neck of my 12 string on it too). I knew music was powerful in the struggle but never saw anything like that, with people crying, clapping, and singing along the first time they heard it. The song became their anthem and the good guys actually wound up winning.

The idea behind the song was just to hang on one day longer than the company. It had legs, even showing up in a songbook of the 2011 Wisconsin protests against union busting. If you decide to listen but aren’t used to Appalachian twang, you may want to stand back and play it low.

I think her message to us in these evil days would come straight from the song: hold out one day more.