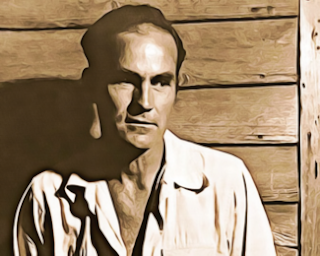 I think of Don West (1906-1992) as a Primal Ancestor of Appalachian hellraisers. I feel very fortunate to have had the chance to get to know him and to have received his “blessing” during his last days.

I first became aware of West when I haunted a used bookstore in Huntington’s approximation of Skid Row, now long demolished. It was one of those magical places where something unexpected could be found on any visit.

On one trip, I came across a shelf of softbound books and pamphlets by an outfit called Appalachian Movement Press. Some had titles like “Paint Creek Miner” or “Songs of Freedom” and told stories of the mine wars, while others might document absentee corporate ownership.

Also to be found there were works of mountain poetry and essays by West. It didn’t take much browsing to realize this was not John Boy Walton stuff.

West’s poetry was a bit like Langston Hughes, whose writings helped nudge me in my life’s direction. Like the great African American poet with whom he had some politics in common, West wrote for and about people who don’t ordinarily read poetry. He was unashamedly partisan, declaring that “Poetry and other creative efforts should be levers, weapons to be used in the people’s struggle for understanding, human rights, and decency.”

A native of north Georgia, West told the neglected story of the mountaineers’ long tradition of struggle. He had no use for the “Gone With the Wind” school of southern history. Instead, he wrote of long-forgotten anti-slavery Appalachians who took up the fight while William Lloyd Garrison was still a child, of poor whites helping runaway slaves along the underground railroad, of courageous southern Unionists who fought the Civil War in their own backyards.

Long before it became fashionable, West fought the passive hillbilly stereotype by pointing to mountain labor’s traditions of struggle and solidarity. I think he—along with people like filmmaker John Sayles (“Matewan”) and author Denise Giardina (“Storming Heaven’)—helped the region recover from the historical amnesia that censored the history of the mine wars and other labor struggles for generations of West Virginians.

But West was more like a literary character than a man of letters. When it came to his adventures, it was hard to say where to draw the line between biography and mythology.  Like a left-wing Jay Gatsby, he seemed to have continually and consciously created his own legend. And he did it well.

It went something like this: in high school, he got in trouble for protesting the racist film “Birth of a Nation.” In college, expelled and reinstated for leading a student strike. Agitating for a union in “Bloody Harlan” County, Kentucky. Organizing workers in publics works projects in the New Deal era. Fighting for civil rights since the 1920s. Recruiting volunteers to fight fascism in Spain.

He had known kangaroo courts and jail cells; beatings by company thugs; Ku Klux Klan terrorism; and government inquisitions. But it never seemed to occur to him to give up the battle.

West was a co-founder with Myles Horton of the Highlander Folk School in 1932, now known as the Highlander Research and Education Center, which played a huge role in the history of the civil rights and southern labor movement.

He soon parted company with Horton but went on to found the Appalachian South Folklife Center in Pipestem in the 1960s. (My kids in the mid-1990s used to refer to it as “the Dorklife Center.”) It never rivaled the Highlander, but it did influence a number of Appalachian young people in southern West Virginia. West helped bring some of the political culture of an earlier era to those who were otherwise influenced by that of the 1960s, which in my book wasn’t a bad thing.

I have come to believe that people like Horton and West helped create an Appalachian “lineage” of social action.

I finally got to meet him in 1988, thanks in part to my friend Yvonne Farley, who had a longtime connection with West.  I had gone to a festival there and was interviewing him for the state magazine Goldenseal.  When we were alone, we had a short Zen-like dialogue which was to have a great deal of influence on my later work.

I asked, not too originally, “What is to be done?”

I have come to believe that people like Horton and West helped create an Appalachian “lineage” of social action which is based primarily on popular education, understood as dialogue, relationship building and problem posing, that is a bit different from the more issue-based community organizing model of Saul Alinsky.

A similar approach evolved simultaneously in Latin America and elsewhere based on the work of the Brazilian educator Paulo Freire. That shouldn’t be surprising, since many people have compared our region to the so-called Third World. Freire said that “Leaders who do not act dialogically, but insist on imposing their decisions, do not organize the people—they manipulate them. They do not liberate, nor are they liberated: they oppress.”

I stayed in touch with West and was able to spend more time with him when, in his last act of political theater, he decided to move back to Cabin Creek to end his days. It was the site of a bitter episode of the West Virginia mine wars in the early 20th century that inspired the writing of “Solidarity Forever,” the international anthem of the labor movement.

West wrote about it at the end of what I think was his best poem:

There was a yesterday of hurt and hope
and solidarity
when a virgin Union’s inspiration
stirred mountain men and women
to heroic feats.
Born on Cabin Creek,
“Solidarity Forever”
went on to stir lowly hearts in all parts of the land.
And there may be a tomorrow
On Cabin Creek
a clean tomorrow,
child of hope and hurt and solidarity.
May it be so.

(Note: I wrote this piece, adapted from a memoir in progress, for Doug Imbrogno's newish online multimedia "magazine" WestVirginiaVille. It's worth checking out. The occasion was the airing on WV Public Broadcasting of a new documentary on West titled "What Will You Do for Your Hills? The Legacy of Don West,” which unfortunately I couldn't watch because we don't get public TV on the farm for some reason.)

Email ThisBlogThis!Share to TwitterShare to FacebookShare to Pinterest
Labels: Appalachia, Don West, labor, West Virginia history, WestVirginiaVille, What Will You Do For Your Hills

Great piece that situates Don West's significance for contemporary folk who may know little or nothing about him. Thanks, Rick. (And get that memoir over the finish line!)