Thoughts on getting through these days 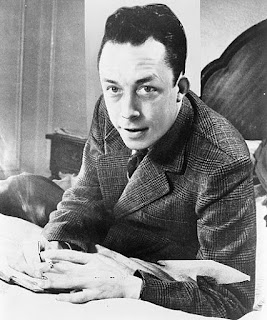 Stephen King…what can I say? I grew up reading his books and watching the movies.

I sometimes go years without going there. Other times, I binge on book after book. By King’s own admission, some are more gripping and substantial than others.

One that stuck with me over the years is The Stand. In case you missed it, the book starts with a super flu epidemic nicknamed Captain Trips that wipes out most of the human race.

Then things really get bad.

On a more literary level, one of my favorite novels is The Plague by Albert Camus, which I’ve often mentioned. It’s about an epidemic in Oran, Algeria around 1940, when the country was still under French control. And the disease is a metaphor for life in Nazi-occupied Europe.

The plague takes over the lives of everyone. People are separated from loved ones and feel totally confined and cut off from the rest of the world. Everything changes, including the sense of time.
In both books, the epidemic requires people to make moral decisions. In The Stand, it’s a pretty stark choice between good and evil. In The Plague, it’s interesting to see the different ways people respond to the situation. Some respond with quiet heroism, while others seem to profit or thrive from the epidemic.

For obvious reasons, those books have been on my mind lately. First though, let me say that the current situation is nowhere near these literary extremes and I don’t think we’re going to get anywhere close to them.

But I think the situation does require a response from us. Probably the worst things we can do now are either to politicize the Coronavirus outbreak (as in “Fake news. SAD”) or spread hysteria…which may entail taking a deep breath or two and stepping away from the TV every now and then.
So how should individuals and communities respond to the latest developments? And what can we learn from it? I have a few ideas:

*take reasonable, evidence-based steps to protect ourselves and pay attention to the latest recommendations and cooperate with the reasonable directions of health authorities, even if it can be a pain in the rear;

*if necessary, do what you can to nudge public officials to step up and do all they can to respond and prepare for the future if the virus spreads. Also, encourage them to take steps to ease the economic impact. We've already had some success with this in WV;

*take Mr. Rogers advice and “look for the helpers.”

*put things in perspective: it’s not like we were immortal before Coronavirus came around. We don’t know how bad the hit is going to be, but it’s not the only threat out there. According to the Centers for Disease Control and Prevention, between Oct. 1 2019 and Feb. 29 2020, there have been an estimated 20,000 to 52,000 deaths from “regular” flu in the US. Worldwide, somewhere between 291,000 and 646,000 die annually from seasonal flu.

We don’t notice what we get used to.

*let’s not recreate past mistakes. Sometimes events like this make people search for someone to blame or some vulnerable group to target. During the Black Death of the mid 1300s, Christians blamed the plague on Jews, who were accused of poisoning wells. This unleashed horrific persecution throughout Europe. The “enemy” is a virus, not other people.

*this could be a reminder of how interconnected people are all over the world. Sometimes I think that very wealthy people, for example, think they can insulate themselves and their children from the effects of their actions on others, whether it’s the damage done by extreme inequality or climate change.

Sticking with the literature of epidemics, that was a theme of Edgar Allan Poe’s story “The Masque of the Red Death,” in which Prince Prospero and his aristocratic friends party in apparent safety while an epidemic raged outside their walls. It didn’t work out very well for them.

There may be a lesson in that. As Bob Marley sang, “When the rain falls, it don’t fall on one man’s house.”

*this could also be a reminder of how important things like paid sick days, universal health care, universal basic income and out of school food programs for children are. We have a lot of unfinished business.

*but the main one is, after taking all reasonable precautions, not to stop living or being human or showing compassion to others out of fear. Shakespeare’s Henry V observed that “we owe God a death,” but let’s not die while we’re still breathing.

That’s the message of a Buddhist parable about a man chased by a tiger. When he comes to the edge of a cliff, he climbs down a vine. The tiger is waiting. At the bottom of the cliff, there’s another tiger. Meanwhile, two mice just out of reach start gnawing at the vine. Then he notices a ripe strawberry. He plucked it and took a bite. It tasted great. The end.

That’s pretty much the human condition.

I’m not suggesting that people should crank up the song “Don’t Fear the Reaper.”

But if you do, enjoy the cowbell.

(This is an updated version of an op-ed in the Charleston Gazette-Mail last week.)