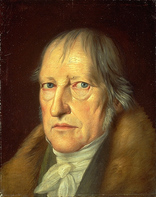 I don't know if it's authentic, but supposedly there's an ancient Chinese curse that goes, "May you live in interesting times."

(According to author Terry Pratchett, there are two related curses. One is "may you come to the attention of those in authority" and the other is "may the gods give you everything you ask for." He's not sure about the authenticity of those either.)

At any rate, it looks like our time is starting to get interesting. I think it's very rarely a good thing when a world-historical event comes knocking on the door. I'm thinking things like the decision to invade Iraq, 9/11, Pearl Harbor, the assassination of Archduke Ferdinand in Serbia in 1914, not that I was around for all the above.

I'm kind of reminded of a quote about history by the great German philosopher Georg Wilhelm Friedrich Hegel, who spoke of it as "the slaughter-bench at which the happiness of peoples, the wisdom of States, and the virtue of individuals have been victimized..."

OK, that may have been a bit of a downer. Here's hoping history forgets about us. Quickly.