Is war worth it? What veterans think 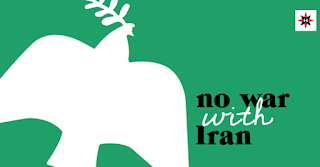 As the US teeters on the edge of another war of choice thanks to the actions of Prince Joffrey  President Trump, it might be good to take a look at what veterans think of the last couple wars.

According to the Pew Research Center,

Veterans who served in either Iraq or Afghanistan are no more supportive of those engagements than those who did not serve in these wars. And views do not differ based on rank or combat experience.

Since these are the people, mostly from the working class, who are going to put their bodies at risk next time around in another war started by rich people, it might be good to consider what they think.

I keep going back to what John Adams, our second president, had to say on the subject: "Great is the guilt of an unnecessary war."

And then there's this line from Dylan: "Here I sit so patiently waiting to find out what price you have to pay to get out of going through all these things twice."
by El Cabrero