Born in the USA 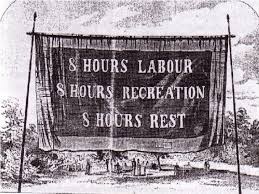 Around the world but not here so much (yet), May 1 is celebrated as International Workers' Day. Ironically the roots of this observance began right here in the USA. A major struggle in much of the 19th and 20th century has been to reduce the hours of the working day, which could run as long as 14 hours or more in the early days of the industrial revolution.

Like everything else in the history of the struggle of working people for basic human justice, the fight goes on. In fact, as new forms of automation enter the traditional workplace, it may take new forms, such as limiting reducing working hours in order to share the available work.

The fight has always been about more than wages, hours and working conditions, as important as these are. It's also been about the need for culture, rest, leisure, education and dignity.

Lately, this hasn't been going so well, as you may have noticed. But it's not over yet.
by El Cabrero