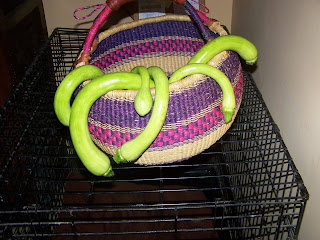 I have mentioned before that a major hazard at this time of year for people living near gardens is an attack of summer squash, an aggressively imperialist species.

The above picture is living proof if more was needed of the dangers of these pernicious plants. Not content to lie there like most vegetables, these green miscreants are about to slither out of the basket and rampage over an unsuspecting world.

DEAL WITH IT. Here's Krugman on the Affordable Care Act and the right wing's state of denial.

THE LATEST JIHAD. It looks like it's true love between WV's anti-gay uterus-police and its attorney general. I figured the latter would be busy recusing himself from cases started by his predecessor which challenge abuses of sleazy corporations.

WOULD THIS BE IRONY OR HYPOCRISY? Although the same WV AG mentioned above seems to be deeply concerned with the personal decisions of women, he pretends to believe that some parts of the Affordable Care Act threaten  privacy. Judges? Personally, I'm leaning towards hypocrisy.

ONE MORE WV AG RANT. As I've pointed out before, this was the same "pro-life" person who expressed regret at Governor Tomblin's decision to expand Medicaid, despite the fact that around 223 West Virginians die prematurely every year because they don't have health coverage. I think that would be another one for the hypocrisy column.

PATRIOT. Union miners overwhelmingly approved an agreement with Patriot Coal. I think it's a pretty big win for the UMWA and would like to congratulate union members and allies who made a bad situation better.