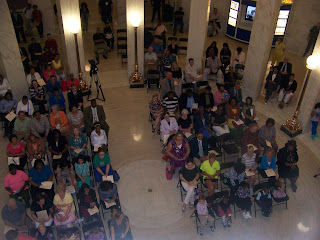 One thing West Virginia does well is public ritual. On Wednesday afternoon, the state officially observed the 50th anniversary of the March on Washington at which Dr. Martin Luther King gave his famous "I have a dream" speech. There was music, speeches, an appearance by Gov. Tomblin and other officials, a bell ringing, and a reception.

The event was organized by the Herbert Henderson Office of Minority Affairs, which was established by legislation in 2012 (legislation which some of us worked for a few years to enact).

I took several pictures, including some of my friend Rev. Ron English, who worked with Dr. King, attended the  march, and spoke at the event. The picture, alas, did not turn out. But this article in which he tells his story turned out very well.

JUST ONE MORE. Here's Nobel economics laureate Joseph Stiglitz on how Dr.King influenced his work in the field.
by El Cabrero