Thanks for the orcs 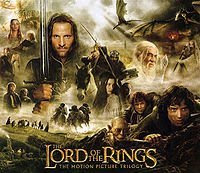 El Cabrero is serving a two week stint in the reserve army of the unemployed. Blog posts during this period were prepared in advance and won't have links or comments about current events.

The theme for this period is my top 10 countdown of books that hit me hardest growing up, in chronological order. So far Book #1 was the Bible; Book #2 was The Book of Common Prayer; Book #3 was The Stories and Poems of Edgar Allan Poe. Book #4 is....

The Lord of the Rings (and I guess The Hobbit too). I fessed up a while back to being an occasional Tolkien dork. I stumbled onto these books when I was in junior high and visiting my brother at Christmas when he lived in Florida. One of his roommates had these odd looking paperbacks on a shelf and I was intrigued. I figured out which one was first and then it was down the rabbit hole.

When I finally finished the series some weeks later, I was depressed, believing that I'd never read anything that good again. What can I say? I was in eighth grade.

That didn't turn out to be true but the times I've been that absorbed in any book have been few and far between.

Ironically, it was only as an adult--and after trying to keep this or that Dark Lord wannabe from gaining total power--that I came to see it as a work of realism.
by El Cabrero

Email ThisBlogThis!Share to TwitterShare to FacebookShare to Pinterest
Labels: books, Lord of the Rings