Curse of the zebra mussels 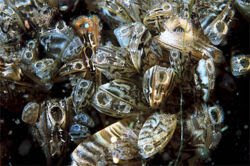 Well, El Cabrero is back in Paradise (he said, with irony) after over a week beside a lake in Vermont. Sometimes I get a little nervous on leaving my beloved state of West Virginia because I'm afraid of missing something, but I was able to monitor conditions here by means of the Precious (aka, the iPhone).

One big insight came my way last week: the wheels of karma may turn slowly but they do turn. Sometimes anyway. Pity me not but lend thy serious hearing to what I shall unfold...

Several years ago on another visit to the in laws up there, we stopped and splashed around in Lake Champlain. At one point, my mother in law attempted to dissuade her grandson from venturing further into the lake by warning him about zebra mussels.

I must admit that this struck me as hilarious, a typical grown up way of scaring a kid into not doing something, as in "if you go one step further into the lake, a savage pack of carnivorous zebra mussels will tear you limb from limb."

I've laughed about that ever since, most recently last week when I decided to take a swim in the selfsame lake. But no sooner had I ventured out to where it was neck deep than my own toe was seriously sliced open by...you guessed it...a zebra mussel shell.

I was hoisted on my own petar...this is what happens when you mess with my mother in law.

FROGS IN HOT WATER are us.

SPEAKING OF WHICH, a number of economists are talking about the need for a second stimulus.

SIMPLE LIVING, by itself, may not cut it, according to this item.