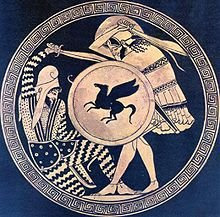 Have you ever racked your brain wondering what if? What if you or I had done something differently at a critical point in our lives?

For that matter, what if, say, Lincoln or Julius Caesar weren't assassinated? What if Alexander the Great lived another 40 years? What if Trotsky won out over Stalin in the early USSR? What if Hitler had died in a mortar attack during World War I? What if....

That kind of thinking can drive you crazy, but it does serve to point out that personal and world history has lots of places where things could have gone lots of different ways.

One such turning point in the ancient world was the war between Greece and the Persian empire. If anyone was taking bets then, the smart money would have been on the might of Persia rather than on Greece, which was not a nation but a number of independent city states that spent much of their time warring against each other.

Greek tragedy, the theme lately here at Goat Rope, came into its own in the aftermath of the Greek victory over the might of Persia. Aeschylus, the earliest tragedian whose works survive, was himself a veteran of that war. He fought at the battle of Marathon and possibly at Salamis and Plataea.

Although he wrote as many as 90 plays (of which only seven survive) and won many honors for this, his epitaph mentions none of this. Instead, it says:

Aeschylus, Euphorion's son, this tablet hides
Who passed away in Gela where the wheat fields grow:
His bravery the glorious shrine of Marathon can tell
Where the deep-maned Medes had learnt it well.

Interestingly, one of Aeschylus' surviving tragedies portrays this world historic conflict from the point of view of his enemies--and he does it well and respectfully. We seem to have lost that ability.

More on that tomorrow.

CLIMATE CHANGE. Here's something else for the coal industry to deny.

CENTER WHAT? This article argues that American attitudes are leaning in a progressive direction.

DEREGULATION. In this op-ed, Paul Krugman suggests that the roots of the current economic crisis can be traced to the explosion of debt from Reagan era deregulation.

That's why I'm a Presbyterian, you know. Once you adopt predestination, you drop a lot of angst as well.

I remember hearing about a Puritan agonizing over predestination and then doing something horrible and saying "at least I know now."